From Wikipedia, the free encyclopedia.

Labour Day has been celebrated on the first Monday in September in Canada since the 1880s. The origins of Labour Day in Canada can be traced back to December 1872 when a parade was staged in support of the Toronto Typographical Union’s strike for a 58-hour work-week. The Toronto Trades Assembly (TTA) called its 27 unions to demonstrate in support of the Typographical Union who had been on strike since 25 March. George Brown, Canadian politician and editor of the Toronto Globe hit back at his striking employees, pressing police to charge the Typographical Union with “conspiracy.” Although the laws criminalising union activity were outdated and had already been abolished in Great Britain, they were still on the books in Canada and police arrested 24 leaders of the Typographical Union. Labour leaders decided to call another similar demonstration on 3 September to protest the arrests. Seven unions marched in Ottawa, prompting a promise by Canadian Prime Minister Sir John A. Macdonald to repeal the “barbarous” anti-union laws. Parliament passed the Trade Union Act on 14 June the following year, and soon all unions were seeking a 54-hour work-week.

The Toronto Trades and Labour Council (successor to the TTA) held similar celebrations every spring. On 23 July 1894, Canadian Prime Minister John Thompson and his government made Labour Day, to be held in September, an official holiday. 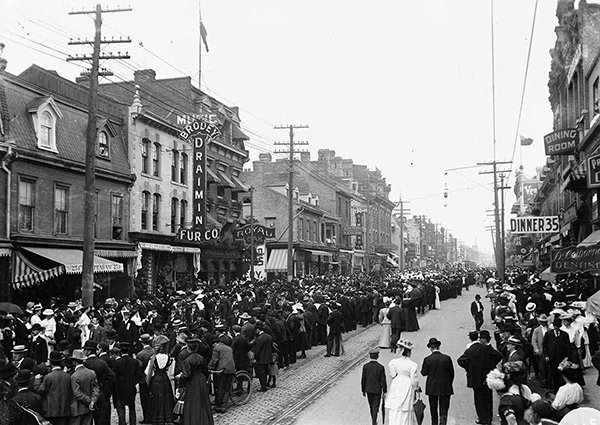 A Labour Day Parade in Toronto, Ontario, Canada in 1900