CAPE (Canadian Association of Professional Employees) has published an article about federal employees and paid sick leave: 9 Myths About Paid Sick Leave. CAPE has shared this information with me and other Bargaining Agents in hopes that we would also share it with our members CAPE has also sent this article to Federal Ministers and Senators. The RCEA and Bargaining Agents hope this will contribute to an open and honest discussion among all Canadians. Over the next few weeks we will post this article.

Myth 1: Sick leave costs the government and Canadian taxpayers close to one billion per year.
In most instances, in the absence of the employee, the employee’s work is not done. The work waits for the employee to return to the work place.

Reality: The sick leave provisions in public service collective agreements serve the purpose of guaranteeing revenue continuity in instances where an employee is unable to report to work for reasons of illness or injury. The typical case of the use of sick leave is when an employee misses one, or two or three consecutive days for reasons of illness. In most instances, in the absence of the employee, the employee’s work is not done. The work waits for the employee to return to the work place. More often than not, the employee does the work by intensifying his or her pace of work or by doing work for no remuneration, for free, at the end of the day or on a week-end. Some instances of sick leave do translate into a cost. But the numbers used by the Conservative government grossly exaggerate the real cost of absences due to illness and injury.

Myth 2: Taxpayers pay for every single day a public service employee is away from work for reasons of illness or injury.

Reality: As explained with Myth no. 1, when a public service employee takes one, or two or three consecutive days away from work due to illness or injury the employee’s work waits for the employee to get back in order to get done. This kind of situation is less true for correctional officers, border officers and other public service employees who work directly with the public or a clientele. However, it is true for the vast majority of public service employees. This type of sick leave absence of short duration is usually sick leave for which no medical certificate is requested by the manager. However, when an absence is for a week or several weeks, or when an employee is forced on long term disability for reasons of illness or injury, then a medical certificate is normally required. These longer absences from the work place are absences that will incur a cost because the sick employee will not be able to make up he lost time when he or she returns to work.
Less than one third of the total average were sick leave days where management required a certificate. The other two third were taken mostly in circumstances where no additional costs were incurred.

What are the Conservative government’s numbers regarding certified and uncertified sick leave absences which would give an indication of what the actual cost of sick leave may be? According to the government’s numbers, the average number of paid sick leave days taken in the federal public service in fiscal year 2011-2012 was 11.5 days. Only 3.8 days on average or less than one third of the total average were sick leave days where management required a certificate. The other 7.7 days where taken mostly in circumstances where no additional cost were incurred as a result of the absence of ill or injured employees. Again, we underscore that the correlation of sick days where no medical certificate was required by management and sick days where there was no actual cost incurred is not perfect. But, it is further indication that the real cost to taxpayers of the current system of sick leave in the public service is only a small fraction of what is being suggested by the Conservative government. It is significantly less than the average of 11.5 days per year.

Myth 3: It is easy to determine the fiscal liability created by sick leave.

Reality: First, it is interesting to note that the notion of fiscal liability for such matters as sick leave was created by the Conservative government. Prior to the 2012-2013 Conservative budget, there was never an attempt to try to measure what kind of “liability” would accrue from public service collective agreements, including their sick leave provisions. Why? Probably because in most matters of the collective agreement, it would be impossible to provide a reliable figure. There is the matter of the reality behind myth number 1. But in addition, public service employees leave the public service with large banks of sick leave credits that they have never taken and will never take. All these sick leave credits cost the employer and taxpayers a total of 0$. They are on paper and are erased with no money going to the employee when he or she leaves the public service.
In other words, only part of earned sick leave is used. And only part of used sick leave has an actual cost.

Myth 4:The government and its public service managers have no control over sick leave and its costs.

Reality: The fallacy of this statement has been demonstrated several times by reliable independent analysis. The PBO has demonstrated that this is untrue:

A report from Statistics Canada did the same. When comparing apples to apples, when comparing the same kind of workers in the public and private sectors, we find that there is an insignificant difference in the number of days (0.8 days, which mean 6 hours per year) employees are absent from the work place for reasons of illness or injury.

Myth 6: Public service employees are vulnerable under the current system because they don’t have enough accumulated sick leave credits to bridge the period of 13 weeks that they must wait until they can receive benefits under the government’s long term disability plan.

The question that taxpayers should ask themselves is whether it is good money management to impose something as expensive as a short term disability plan to address the situation of less than 2% of public service employees? Yes we are prepared to believe that more than 65% of public service employees do not have enough sick leave credits to carry them over the waiting period to long term disability benefits. But they don’t need those credits. Less than 2% do.

Myth 7: Service unions protect interests that are not reasonable and fair to taxpayers.

Reality: It is true that the role of a public service union is to defend its members. Who else will defend them? But only shortsightedness can explain why a government equates fairness for employees with unfairness for taxpayers. The truth is that public service unions have provided the employer with many inexpensive ways of dealing with the problems created by the disjointed system of sick leave/long term disability plan. In fact, and contrary to what was said by Treasury Board President, union representatives worked for months with management representatives and made a series of recommendations that would be less expensive to taxpayers than what the government appears to be planning. However, talks broke down when the government said the only options it will consider will be a short term disability plan managed by a private insurance firm.

Myth 8: The Conservative government knows how to manage.

Reality: Simply on the matter of sick leave, the numbers provided by the Conservative government show that significantly more public service employees have been off work sick under its management. Comparing the period of four years that predates the period the Conservative government has been in power to the period of six years when it has been in power, the average proportion of public service employees who have taken paid sick leave has gone up by 3,7%. 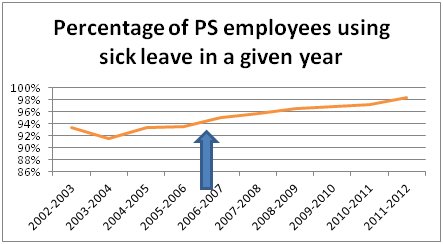 Since the conservative government has been managing the public service starting in fiscal 2006-2007, the increase has been almost 5% when comparing fiscal 2011-2012 to the fiscal year immediately prior the Conservative government in 2005-2006. Expressing this increased number of sick days in number of full time employees, the additional days of sick leave is equal to 0.7% employees off sick, all year round. The public service work place has become a very unhealthy work place for many reasons over the past six years, with its probable negative effects on productivity. And it’s only getting worst.

Myth 9: The Conservative government would never try to mislead you.

Reality: The average sick leave of 18.26 days reported by Treasury Board Secretariat (TBS) includes time missed due to workplace injuries and unpaid sick leave. The average number of paid sick days taken by public servants in the core public administration (CPA) was reported at 11.52 days per year in 2011-2012.